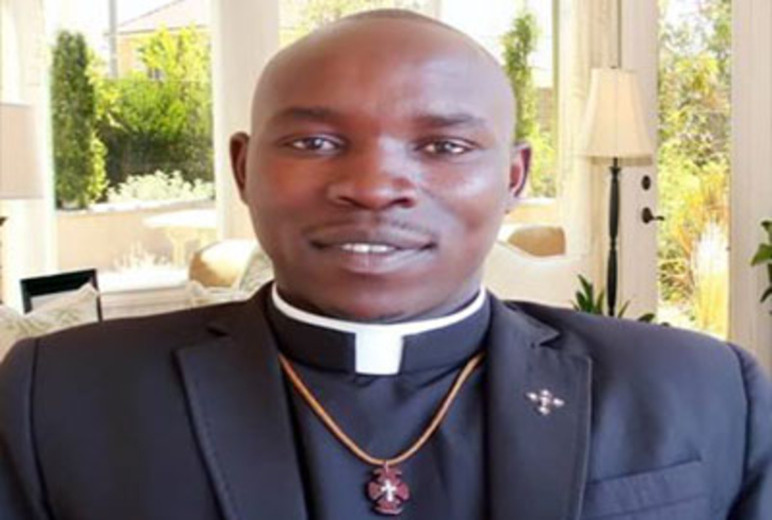 
The Parish Priest of Oriajini Parish, Rev. Fr. Emmanuel Drici Arem, has warned Christians against abusing crosses and crucifixes especial those on graves. Fr. Drici said this when he was receiving a cross that had been removed from the grave of late Ondoma Pio by a self-acclaimed false prophet Edreru Yona in Terego District, Katrini Sub-County, Mulubu Village, about 500 meters from Oriajini Catholic Parish Church. This warning comes as the Christians in Arua Diocese are preparing to celebrate the Feast of the Exaltation of the Cross, that would have been with a Diocesan Pilgrimage to Holy Cross Pilgrim Centre at Indriani Sub-Parish, had it not been for COVID-19 pandemic.
The cross that Yona removed was returned to the Parish Priest of Oriajini Parish by a court ruling in Arua City in which he was charged with desecrating sacred places. Previously Yona was charged with flouting presidential directives to prevent the spread of COVID-19 and remanded to Gbukutu Prison in Koboko Disctrict. “We got reliably informed that, after serving two months for violation of the Presidential Directives for Closure of Churches and Shrines during the Covid19 Pandemic, Yona was sentenced to two years in jail in-line with the evidences presented by some clan elders and findings from Intelligence investigations on his code of conduct. Meanwhile, the cross which had been confiscated has been delivered to Oriajini Catholic Parish, awaiting arrangements of the clan elders and the Church to re-fix it back onto the grave with diligence”, said Fr. Emmanuel.

Findings from Mulubu Village, especially from elders, indicated that the man in question, i.e., Edreru Yona (aged about 38 years old) was in a dare search for wealth which he first started by being a humble bicycle boda-boda rider in the Past. On the occasion of the death of this late father Ondoma, Yona began appeasing the ancestral spirits and the deity of the Aree Clan called: “Anderia–Alaa,” by slaughtering goats and chicken, sprinkling the blood on the compounds, graves and some of the clan mates who came around to eat the free meat. This practice took to the extent of him removing the marble cross that was fitted on the grave of his deceased father. He then proceeded to abusing and misusing the cross, rosaries, blessed salt and holy water. “He purchased some rosaries which he immersed into the waters placed near the altar he erected, upon which he invoked the deity and ancestral spirits, referring to them as saints. He then began moving around homesteads planting some traditional plants to claiming that they avert evil spirits,” the elders narrated. Some of Yona’s practices led to clashes, fighting and destruction of homes in the local Community. Consequently, on Saturday 27th March, 2021, in Oriajini Primary School, a security meeting was convened by the Resident District Commissioner (RDC) of Terego Disctrict, District Police Commander (DPC) of Terego Disctric, security operatives and religious leaders of the area. Yona and his follower were in full attendance. In the meeting, Yona’s influences into insecurity and threat to peace by his followers were condemned. As his acts of religious practices went on, Pastoral Councilors in Oriajini Parish resolved the few people who had started following Yona must desist from involving into such religious syncretism, apostasy and heretical manner of conduct in Faith, and join the programme for catechizing the lapsed Christians based the book “Our Journey Together” meant for Instructions of Lapse. Fr. Emmanuel Drici noted that pastoral agents now have a bigger task to engage the Christians and Community into serious continued catechesis and dialogue especially in the Small Christian Communities for people to use human Reason prudently in faith and religious matters, harmonious conflict resolutions. He encouraged the families to pray together daily, trusting in God for protection while using the available health facilities for frequent checkups and Medications.