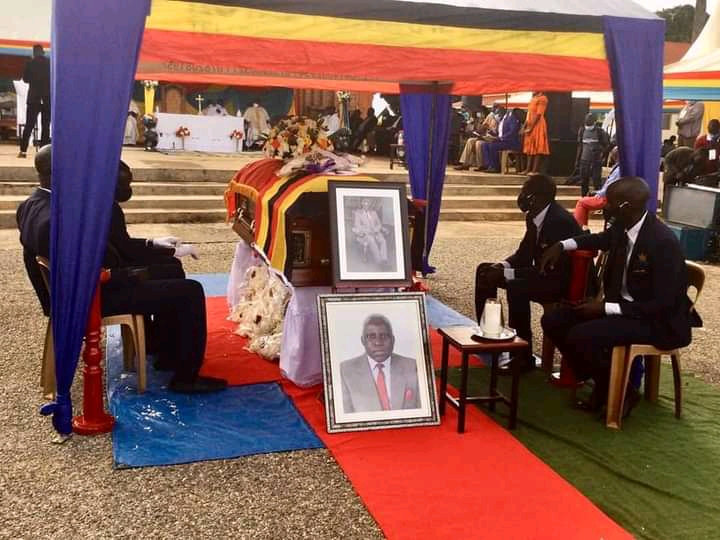 
Former Member of Parliament of Madi Okollo Constituency Hon. John Arumadri Drazu has been laid to rest at his home along Giligili road in Ediofe, Arua City. This was after a funeral Mass in front of Ediofe Catholic Cathedral led by Rt. Rev. Sanctus Lino Wanok, Bishop of Lira diocese, co celebrated by Rt.Rev.Sabino Ocan Odoki, Bishop of Arua Diocese and several priests from Arua Diocese and Nebbi Catholic Diocese. Late Hon.John Arumadri Drazu who was 71 years when he passed on , succumbed to Pulmonary embolism (blood clot in the lungs) and was found lifeless on the bed at his residences in Anyafio cell in Arua City on Thursday morning of 7th October 2021. 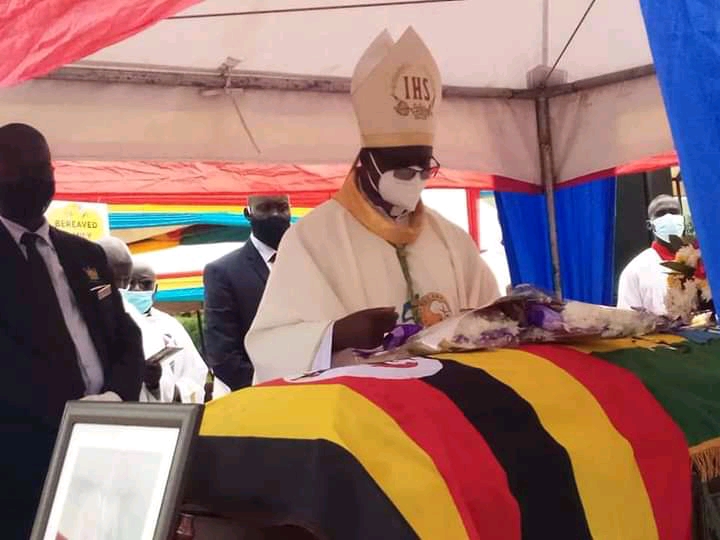 Rt. Rev.Sanctus Lino Wanok described John as a believer, prayerful and an honest Christian who did his work diligently in good faith without malice and always asked questions. “If there is any politician who has always called me for prayers it is John Arumadri Drazu.” said Bishop Wanok. Bishop Wanok reminded the mourners of the difficulties that come with being true Christians, urging them not to let their hearts be troubled but to be alert, orderly and inquisitive to understand the way of Jesus. “Jesus told his disciples about his death which is imminent; and said, do not let your hearts be troubled but trust in me, things will be okay. We human beings fear death justly, because it is irreversible. Jesus tells his disciples; you know the way. Jesus invites all to a total faith, that is the faith of a child, unless you become as little children ,you will never enter the kingdom of God. And this faith of a child for an adult is very difficult because we compare the contrast of life, opposites of life makes us search the way out. The road to life is Jesus and the life to embrace is Jesus and this is done in truth. It is difficult humanly speaking and it is possible humanly speaking and faith makes this possible. ” said the Bishop The Bishop warned Christians against tampering with the cradle of life, that is the family. “We have implants and contraceptives that are all fashioned for the women who are the carriers of life. Covid-19 has challenged us to today, our daughters are pregnant and you hear that our daughters are pregnant because schools are closed. That is not the case. The daughters have been brought up by Marie Stopes, that without implants we cannot live. John would have not stomach this. John loved life, he loved good life and he protected life. When we continue tempering with the family then we cannot have good leaders, good politicians and good christians.” 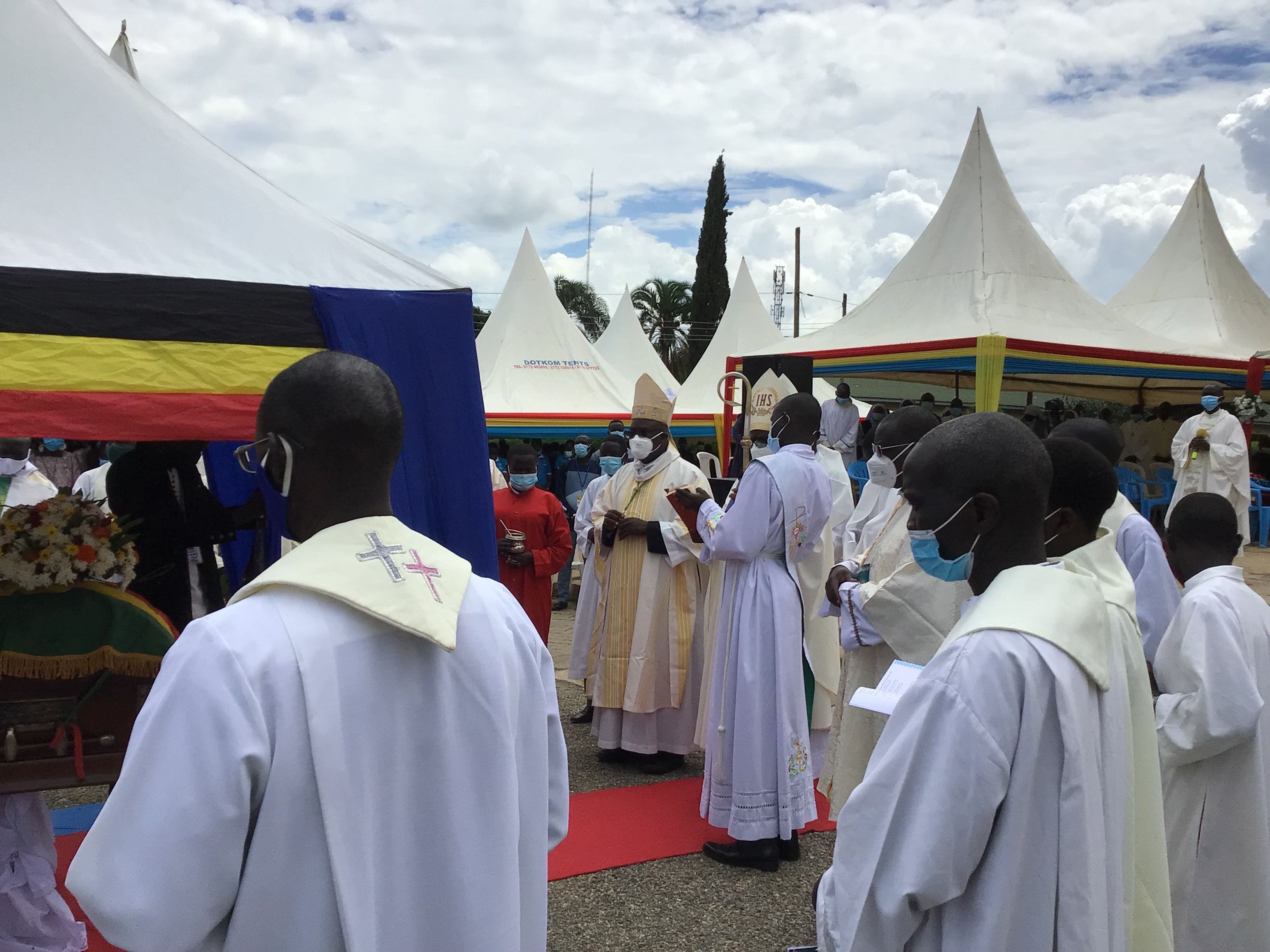 The Party President of Forum for Democratic Change (FDC), Engineer Patrick Oboi Amuriat, described John Arumadri as a man of great humility. “During the campaigns when I came to West Nile, I visited John at his home to pay respect to his late wife who had passed on and we were not able to attend the funeral. When he saw me bare footed, he removed his shoe and walked around with me. That is the humility that John had. As the Forum For the Democratic Party MP of bigger Madi, John showed us to the greater Madi, You might say he is in the opposition but he was in the opposition for a purpose and not faaa. He formed a team from the West Nile that spoke about the plight of the people. The road coming from Karuma to WestNile John Arumadri fought together with us while we served together in the committee of works.” Amuriat said..


The Chief mourner of the day, Rtd. Col. Dr. Kizza Besigye, speaking to the mourners at the funeral expressed his sympathy to the family of his friend John who he knew to be a man whose loyalty and love was paramount. He acknowledged that he is very much certain that for the man John has been, he is confident that a child will rise up from the family to be like the father.
Hon.John Arumadri earlier served as Member of Parliament of Uganda from the year 2001 to 2006 representing Madi Okollo Constituency, and was re-elected to serve until 2011 when he lost to the National Resistance Movement (NRM) candidate Martin Drito. 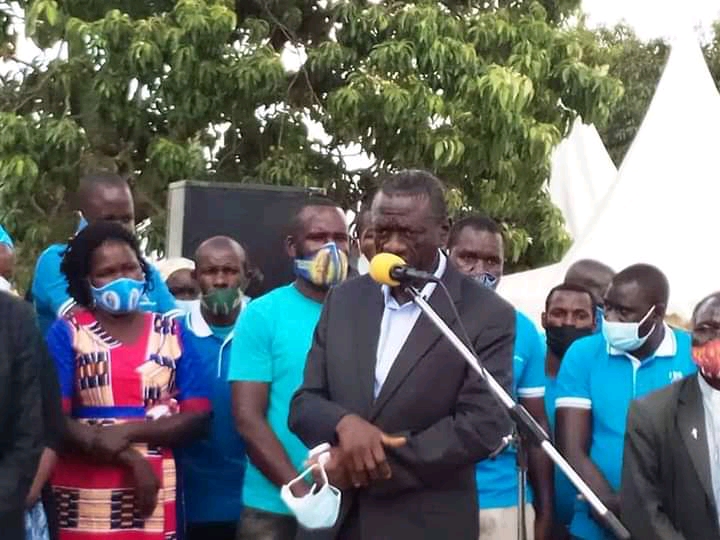