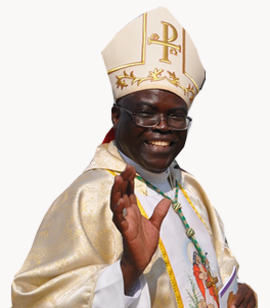 
On behalf of the Diocese of Arua and on my own behalf, I wish you a very good and a God inspired visit to our website. May this website be a useful tool to communicate among ourselves the gift of faith, hope and love that we received at our baptism. As we make use of this website, may we continue to enrich each other and grow together in the one family of God to which we all belong.


The Rt. Rev. Sabino Ocan Odoki was born at Layibi, Gulu Archdiocese on 8th August 1957. He was ordained a Priest on 10th September1983 in Gulu Cathedral.


On 22nd July 2006, His Holiness Pope Benedict XVI elected him Auxiliary Bishop of Gulu Archdiocese. Then on 21st October 2006 he was consecrated Auxiliary Bishop of the Archdiocese of Gulu by His Grace, John Baptist Odama assisted by His Eminence Emmanuel Cardinal Wamala and the Apostolic Nuncio in Uganda His Excellency Christophe Pierre.

1976-1979: “Philosophical studies at the “National Major Seminary Katigondo” in Masaka;

1980-1983: Theological studies at the “National Major Seminary Ggaba” in Kampala;

He was ordained a priest on 10th September 1983 and incardinated in the Diocese of Gulu.

1985: Private Secretary of Bishop Kihangire and Chaplain of “Christ the King Primary Teachers’ College” and the “Sacred Heart Secondary School” in Gulu.

1996-2007: Rector of the National Major Seminary Alokolum in Gulu and Auxilliary Bishop of Gulu Arch Diocese.

2006: On 22nd July, he was elected Auxiliary Bishop of Gulu and consecrated on 21st October by Archbishop John Baptist Odama.

On 19th August 2009, the Pope Benedict XVI appoints him Apostolic Administrator “sede vacante et ad nutum Sactae Sedis” of Arua diocese, conferring on him all the faculties in the same Circumscription.